See The Castle From The Inside As If You Were There

Most castles are more story and stone than actual medieval fortress these days. They take an enormous amount of money to rebuild, maintain and to live in. Almost all castles used as residences have to cater to the public, either through events such as weddings/parties or tourism, to make enough money to use as a residence. The high property tax in England makes it almost impossible for people of wealth to live in the historic palaces and castles. More and more properties are becoming non-profits that lease the facility back to the former owners. The non-profit maintains the property through funds raised by tourists and the privacy of the inhabitants are protected. 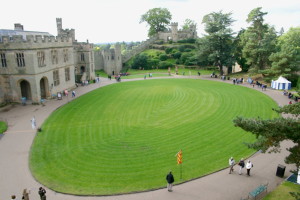 Looking down at the courtyard from the front tower. 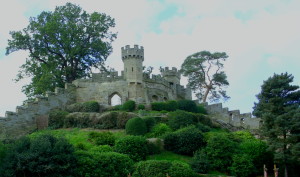 It is a beautiful castle.

There are castles, and there is Warwick Castle. It is the Disneyland of castles designed to entertain the family like no other castle I visited in England. The beautiful town of Warwick is 95 miles northwest of London, about an hour and forty minute drive on the smaller roads of England. It is well worth the trip!

If you are taking your family to England and have children, it is the best castle to visit. It is owned by Merlin Entertainment, the same company that owns the famous wax museum in London, Madam Tussauds. Merlin Entertainment is an organization that knows how to entertain and Warwick Castle is a great example of it.

Video 1 of the opening of Warwick Castle

Video 2 of the opening of the Castle of Warwick 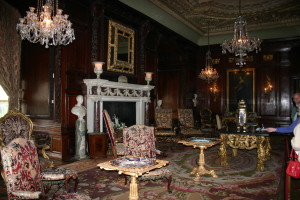 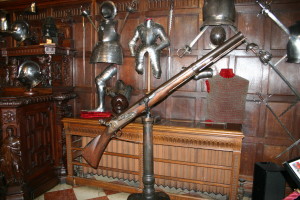 Lots of old weapons and armory.

The castle has been restored to its magnificent glory. Management has spent more than $10 million over the last 10 years on restoration. Many of the historic furnishings are still available for viewing. The castle is impressive as you approach from a distance. I made it at the opening of the front gate and there was a great show put on by actors that was very entertaining for all members of the family. Once inside, there are free tours, bird and hawk shows. There is a modern restaurant with adequate restroom facilities and lots of re-enactments. It is a children friendly facility with all the pageantry and glory of Snow White. Court jesters walk the premises and the young girls love the princesses who stand about in flowing medieval gowns talking to the children as they walk by. For the boys, there are lots of armor, swords and other weapons for the boys.

The History of Warwick Castle

It is also a castle that is rich in the fabric of English history. It was first attacked in 1264, besieged in 1642 and damaged by fire in 1871. It was owned by the Earls of Warwick and the Greville family, as a private home, until 1978. The castle itself predates William the Conqueror, the Saxon who defeated King Harold at the Battle of Hastings and built the Tower of London. The daughter of the Saxon King Alfred the Great, Ethelfleda, built a walled building in Warwick that was used against the invading Danes in 914. The first castle to appear on the site was a wooden motte and bailey (wooden fort built on high ground with a moat) constructed in 1068. Over the middle ages, through successive Earls of Warwick, the wood was replaced with stone. 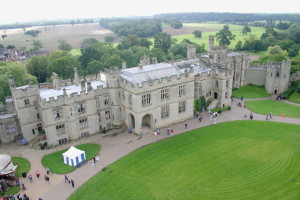 In 1068, while consolidating power, William the Conqueror built a series of fortresses from the south to the north of England to protect his allies and Saxon armies from the English. The motte and bailey was the most popular castle design during that time. The high ground allowed gave the defense the advantage.

In 1242, the last Beaumont, who is the Earl of Warwick, dies without an heir and it is passed to his sister Margaret and her husband John Du Plessis. In 1260 stone began to replace the wood at the castle. 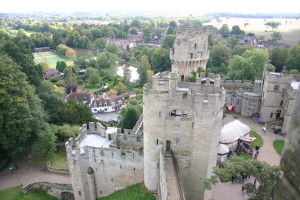 A view of the castle and landscape from Guy’s Tower, the tallest tower.

In 1263, Margaret passes away childless and the castle is passed to her cousin, William Maudit. Unfortunately for Maudit, he sided with the King during the Barons War and loses the castle. The leader of the barons, Simon de Montfort, Earl of Leicester, attacks the castle and Maudit and his wife are captive and held for ransom. In 1268 Maudit passes the castle to his nephew, William de Beauchamp, upon his death and so begins the dynasty that will last 148 years and bring Warwick Castle to the height of its fortunes.

At a time of political tension, Guy de Beauchamp seizes Piers Gavestone, rumored to be the King’s lover and close ally, and brought him before a tribunal of barons. He is tried for treason and sentenced to death. He is killed by being run through by a sword and then behead on a road nearby. 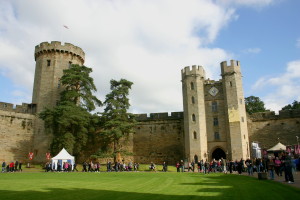 The front entrance from inside the castle. 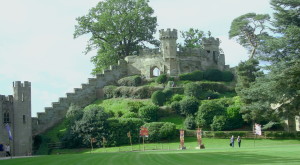 Between 1350-1400, several large sections of the castle were completed including Guy’s Tower, Caesar’s Tower and the Dungeon. In 1397, Thomas de Beauchamp is exiled to the Isle of Man by Richard II for confessing to treachery. He is able to reclaim his inheritance when Henry IV defeats Richard II in battle. The Earl of Warwick supervisors the trail of Joan of Arc and is actually at her execution when she was burned at the stake in France.

In 1449 the last de Beauchamp dies and the castle is passed to a sister who is married to Richard Neville. During the War of the Roses, Richards helps to defeat both Henry VI and Edward IV earning him the title of “kingmaker”. In 1471, Richard dies in the battle of Barnet and his estates are awarded by Henry IV to his brother George, Duke of Clarence. George happens to be the brother of King Edward IV of England who he sought to overthrow. He was imprisoned in the Tower of London and he was executed, more than likely, by being drowned in the wine he loved so much. 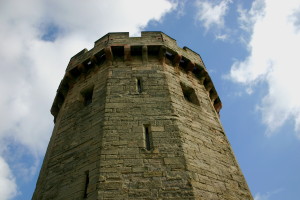 In another interesting twist, another Earl of Warwick is executed for conspiring with the second of two pretenders to the throne, which were common in those times, Perkin Warbeck. In 1572, Queen Elizabeth visits the Castle. In 1604, the castle is given to Sir Fulke Greville. Twenty-four years later he was killed by a disgruntled manservant and his ghost is said to haunt the tower in which he lived today.

Royalist soldiers were kept prisoner in the dungeon during the British Civil War and the Castle once again withstood a siege. In 1695, King William III visits the castle. The title of Earl of Warwick, given to another person when Greville took control of the castle is reunited with castle ownership in 1759. The castle continues to add to its glory by adding a state dining room, a conservatory and new landscaping during the next 100 years. Queen Victoria had lunch at the castle in 1858. 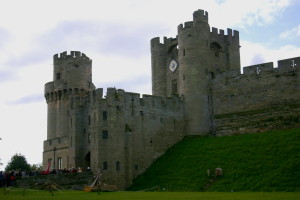 When the 1,000 year old fortress enters the industrial age, the mill nearby was converted to an electric generating plant providing electric lighting to the castle. In 1938, the 7th Greville Earl, Charles Guy, goes to Hollywood to become an actor. His career peaked with an supporting role in Dawn Patrol starring Errol Flynn and David Niven.

Lastly, in 1978 the castle was sold to The Tussaud’s Group, which later became Merlin Entertainment. In 1996, Her Majesty The Queen and the Duke of Edinburgh are given a tour of the castle. The Queen also gave a commemorative sword to the castle.

There are always new events and shows at Warwick Castle. If you are headed to London, Warwick Castle is one of several major sites within 2 hours of London you must see: Leeds Castle, Stonehenge, Windsor Castle and Warwick Castle.

Here is a video from the bird show that was playing when I was there.

This entry was posted in Can't Miss Sites, Castles, London. Bookmark the permalink.