The Romans named the part of Great Britain they controlled ”Britannia”. The inhabitants of Britain prior to the Romans had already established trade and cultural communications with continental Europe, but the Romans introduced new developments in commerce, industry, agriculture and architecture. The Roman invasion began in 43 AD and included the entire island south of what is today Scotland.

Most of the information known about Britannia is from archaeological explorations, as there is little passed down in writing. There is epigraphic evidence, inscriptions and writings on stones, along with the achievements noted by Roman Emperors, including Hadrian and Antoninus Pius, who built walls across the northern border of the region.

The original occupants of Britain were the Celts who descended from the Gauls. The Gauls were first acknowledged from what is now the area of the Middle East known as Turkey. Paul writes a letter found in the New Testament to the Church in Gaul known as Galatians. The Gauls migrated across central and western Europe. In the western regions they became known as the Celts. The Gauls were a warrior culture respected by the Greeks and Romans. Eventually the empire of the Gauls was incorporated into the Roman Empire. Julius Caesar first sent armies from Rome to Britain in 55 and 54 B.C. to determine if the Celts were aiding the Gallic resistance in what is now France.

Part of the original wall around the Roman city of Verulamium in what is now St. Albans.

The Romans landed in Kent but were limited in their military ability due to no cavalry and heavy storm damage to their ships. Although a military failure, it was a political success with the Roman Senate declaring a 20-day public holiday to honor the success of the trip. Following his second invasion, Caesar departed the country after bringing Britain into the sphere of Roman influence. Caesar left with his troops but established a client kingdom in Kent friendly to Rome.

Caesar Augustus planned invasions after 30 AD, but it was determined that taxes brought in through trade were greater than through conquest. Rome supported two powerful Celtic kingdoms in southern Britain, the Catuvellauni and the Atrebates. When war broke out between the two kingdoms Claudius, Caesar at the time, invaded Britain in 43 AD in support of the Atrebates.

The Romans were amazing engineers. This is a map of the Roman roads built almost 2,000 years ago in the UK.

The invasion was led by Aulus Plautius. The size of the Roman force is not recorded, but there was at least one Roman legion (5,000 soldiers), maybe more. II Augusta was commanded by the future emperor Vespasian. Believe it or not, the invasion was delayed by fear. The troops were afraid of crossing the sea from France and fighting beyond the known world. An imperial freedman eventually persuaded the troops to cross the ocean. It took the Romans two battles to defeat the Catuvellauni and their allies. Resistance continued as Plautius stopped at the Thames and sent for Vespasian. Reinforcements arrived in the form of artillery and elephants for the final march on the Catuvellauni capital, known as Colchester today.

After capturing the south, Romans turned their attention to the west in what is now known as Wales. In 78 AD, Roman troops conquered more of the island increasing the size of Roman Britain. For most of Roman Britain history there were a large number of Roman troops on the island. For the next 200 years the Roman army fought the uncivilized tribes from the north, the Caledonians and Pics.

Northern Boundary of the Roman Empire

A unique Roman-Britain culture emerged for the 400 years after the initial invasion. The Romans were never able to extend their boundaries northward into Scotland, then Caledonia. In 128 AD the Emperor Hadrian built a massive stone wall, 8 feet wide and 13 feet wide, from the east coast of northern Britain to the west coast of Britain to keep out the raiding Caledonians. In 142, a parallel stone and earthen wall, the Antonine Wall, was built about 100 miles north of Hadrian’s Wall. For reasons unknown today, the Antonine Wall was abandoned by the Romans who retrenched south at Hadrian’s Wall. 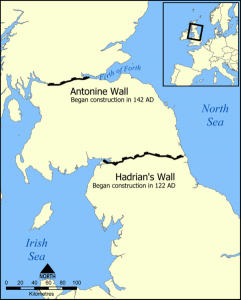 Map of Roman walls to keep the Caledonians and Pics (now Scots) out of Roman territory.

Both of these structures were architectural masterpieces for their time. A series of large and small forts were built along the walls and manned by Roman troops to keep the raiding Caledonians out of Britannia. Parts of these enormous walls exist today, but over the centuries the materials used to build these massive structures were taken by builders and farmers to use for personal use. Roads, homes, churches and territorial stone walls for sheep ranches were built with the stones from Hadrian’s Wall. National historical societies operate some of the remaining sites where the grandeur and majesty of these walls can be viewed and appreciated, even today.

Roman Rule didn’t end on a specific date, although the year 410 AD is often used. In 383, Roman troops were removed from north and west Britain. This is the date Emperor Honorius replied to a request for additional troops in Britannia. His response to Romano-Britain was to “see to their own defense”. The Roman Empire could no longer defend itself from internal rebellion or external threat posed by expanding Germanic tribes and could no longer afford to send troops to Britannia.

The next 200 years were the least documented in British history. The only way to determine the course of events during this time period is through the study of the archaeology at various sites in Great Britain. Although Romanized, most of the inhabitants were still Celtic. Urban areas began to deteriorate and the population of the entire island may have declined. Immigrants from Germanic tribes began to show up; the one most mentioned is Saxon.

After the Romans pulled out of England, the Germanic tribes didn’t overtake Britain immediately nor did culture collapse altogether. Roman coins stayed in circulation for decades, although barter became more common since no more coins were minted. Post Roman Britains built wooden structures which would not have withstood the centuries as well as the stone structures of the Roman period. The Roman villas, or houses, remained occupied largely by wealthy and powerful individuals. Over time the Saxon influence became greater, but the Roman influence on Britain was powerful and stayed long after the Romans were no longer in Britain.

The Romans were builders and masterful engineers. After conquering, they brought peace and prosperity wherever they went. They brought Roman ingenuity, architecture and innovation to their conquered nations. Primitive cultures flourished along with Roman influence and the quality of life improved for most.

Evidence of Roman life in Britain can be seen everywhere, although most British today don’t seem to appreciate it as a tourist might. The stones from Hadrian’s Wall were used to build roads, churches, cathedrals, homes and fences. Many of these can be seen 2,000 years later. St. Albans Cathedral was built in the 11th century from the stones used to build the castle wall and Roman villas in Verulamium, a large Roman settlement nearby. Many of the “motorways” in Britain follow the original roads built by the Romans. To this day, cathedrals, churches and medieval castles are built on the stone foundation of Roman buildings.

The Dark Ages refers to the period of time ushered in by the fall of the Roman Empire in 476 AD. Originally the term “dark” referred to the slide in the standard of living in the western world. The lack of Latin literature, general demographic decline, limited building activity, lack of material cultural achievements in general contributed to the coining of the phrase “Dark Ages”. Technology, architecture, politics, art and innovation seemed to have reached a peak during the Roman Empire. Although the time frame differs for many, the Dark Ages lasted almost 1,000 years after the fall of the empire. Life seemed to be more difficult for most people than during the period of the Romans. The period is characterized by relative scarcity of historical or other written records.