Verulamium – A Roman Town Near London

Posted on October 10, 2012 by teacherideclare

Verulamium was one of the largest cities in Roman-Britain. Today it is known as St. Albans, after the martyred saint who was beheaded in 308 AD on order of the Roman Emperor Diocletian. This site was the center of one of two powerful British tribes, the Catuvellauni, encountered by the Romans in 43 AD. The Romans had two main priorities when conquering a new territory: 1) prevention of revolt and 2) tax collection. Communities who came in contact with Roman legions could either: 1) be under the direct influence of Roman “garrisons” who policed their community or 2) become a client kingdom. In a client kingdom an appointed local ruler would be responsible for maintaining law and order as well as the collection of taxes to Rome. It appears the area that became Verulamium chose the second and most peaceful option.

St. Albans, where the ruin of Verulamium is located, is 22 miles north of the center of London. It is accessible by car, train or bus.

I rushed out of my business meeting with the hope of making it to the two great sites in St. Albans before they closed. The first, St. Albans Cathedral, was built in honor of St. Albans and is one of the great cathedrals of the Church of England. St. Alban was one of the first Christian martyrs who was beheaded on orders by the Roman Emperor in 308 AD. The other site was Verulamium, a 2,000-year-old Roman fort and town.

The two locations are near each other, separated by a small stream. St. Albans Cathedral sits upon a large, sloping hill that overlooks the old Roman town. In fact, large parts of the Cathedral were originally built from the stone used to build the Roman town of Verulamium after the Norman invasion in 1077.

Like everywhere in Britain the parking lots always seem to be a long distance from your final destination. I had to park my car at the farthest point from the Cathedral and Verulamium. It is a nice walk, but I was in a hurry and in my dress shoes, which weren’t the most comfortable to do long distance walking.

Oliver Cromwell stayed here one night during the battle of St. Albans

I crossed the small creek towards the imposing hill to the Cathedral. Along the creek bank is an old pub with a historical marker. Oliver Cromwell, who led the Parliamentarians in defeat of the Royalists during the British Civil War, stayed in the pub and housed his horse in the stables during the battle at St. Albans. It is impossible to go anywhere in Britain and not run unexpectedly into history.

I stayed longer in the Cathedral than I expected. The Cathedral was grander and busier than I envisioned. The boys’ choir was practicing and it was enchanting. There was an Evensong service and I had to stay and enjoy the wonderful music. It put me way behind schedule, but while there was still sunlight I was going to see as much of Verulamium as I could.

Listen to Evensong at This Beautiful Cathedral – Enchanting

Crossing the creek I saw one of the few remaining sections of the old Roman wall that once surrounded the town. The old Roman town is now a giant park with multiple pitches for soccer fields, basketball courts, picnic areas, tennis courts and more. Regardless of the time of year Britain is green and lush, so as I stood in the center of the old town I paused to appreciate the beautiful and relaxing sight. 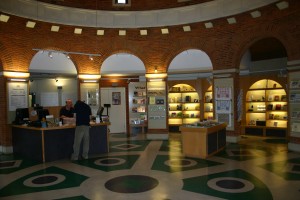 I scurried to the museum hoping it was still open, since it was after 5:00 PM and few commercial properties in Britain, except pubs, are open after 5:00. It was a long walk across the park as the former Roman town was over 200 acres. Walking up the steps of the museum, the lights were on and I was hopeful they were open. The door was unlocked and two workers were standing inside the door. They informed me that it was indeed closed, but they were open for a special private event at the museum. They must have seen the disappointment in my eyes and they offered me a quick, private tour. The museum might take an hour or so in order to go through it properly, but I took a 20 minute privately guided tour. It was great! I gave them both a tip and they seemed as genuinely appreciative of my generosity as I was theirs. 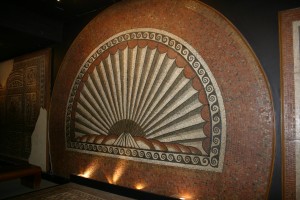 This mural was found buried in the ground during excavation. The detail is amazing. 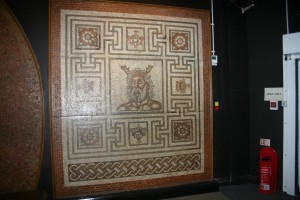 Another mural just found under the ground where it was left as the Romans left Britain in 410 AD.

With more information in my hands from the museum, I was able to walk the grounds on my own noting different ruins within the town. There is plumbing that was discovered under what was originally a large villa still on the property. The only Roman theater built in Rome was just outside the walls. The main gate is visible, but only from ground level. You can see the outline of where the stones were laid to build a high stone wall that served as a fortress for the Roman town, not so unlike a medieval castle.

Walking to the parking lot I accidently walked through a golf course and had difficulty getting back to my car. My feet were killing me. Yet as I drove off I kept thinking about the large open park that was one of the largest Roman towns 2,000 years ago. I love imagining what the original inhabitants would think if they could see how things are today versus how they were when built. A once walled, thriving, ornate city is now a lush park where lots of children enjoy playing. On the hill overlooking the old Roman town is a massive cathedral, built in part by the stones once part of the old Roman community. Britain is where the old and the new of western civilization meet.

The Background and History

The Roman town Verulamium was the center of the powerful pre-Roman tribe known as the Catuvellauni. After the Romans left Britain in 410 AD, the area took the name of St. Alban who was the first Christian saint killed in Britain. Alban was decapitated outside the gates of Verulamium in 268 AD for harboring a Christian who refused to worship the pagan gods of Rome. The Roman Emperor Diocletian published the “edicts against Christians” which required all Roman citizens to worship the Roman gods and not the Christian God. Alban harbored a fugitive Christian priest who had refused to comply. Upon being caught, the local Roman governor decided that Alban should die in his place. Alban would later become sainted by the Catholic Church and the town would take his name during Saxon times. The site was deserted by the late 5th century. The growth of a new settlement in nearby St. Albans left the Roman town open to excavation. 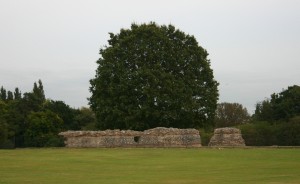 The view of St. Albans Cathedral from Verulamium. The stones to build the cathedral were taken from the Roman town.

Verulamium was granted the rank of a municipium in 50 AD which gave its inhabitants full Roman rights. The most likely reason for this was due to the early surrender by the Catuvellauni tribe following the death of Togodumnus, their warrior king. The town’s first defensive system was started in 55 AD. It was a large bank and ditch which enclosed an area of 119 acres.

The defense would prove inadequate. Upon the death of a local ally king to Rome, Prasutagus, the Romans annexed his territory against his will. A king of a client state, Prasutagus’ will was ignored. They flogged his daughter and raped his granddaughters. In 60/61 AD, the former king’s daughter, Boudicca, raised an army and attacked the Romans resulting in the loss of 80,000 people. The rebellion destroyed two Roman towns, including Verulamium. The defeat caused the Emperor Nero to consider withdrawing the Roman troops from Britain, but Suetonius, the general of the Roman-British army, defeated Boudicca and re-established Roman rule. By 79 AD the town was rebuilt.

Around 155 AD, a fired destroyed almost half of the town. Again, the town was rebuilt, but this time with more stone than timber. Old records show the new city had two monumental arches, a theatre, a basilica (building used for administration) and a small forum (public marketplace). Over the next two centuries the town established itself as a wealthy market center, perhaps the most important in Roman Britain, with comfortable houses, fine mosaics, Italian marble and a piped water supply. By the 4th century, Verulamium was the third largest city of Roman Britain after Londinium (London) and Corinium (Cirencester). Within 25 years of the Romans leaving Britain, the theatre had become a trash dump and by 430 AD, the town had fallen into decline. 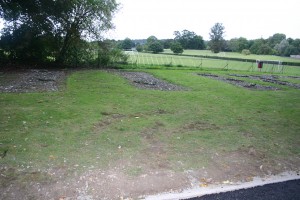 The foundation of the original stone gates of Verulamium.

The city was quarried for building material when medieval St Albans was first found; indeed, much of the Norman Abbey was constructed from the remains of the Roman city, with Roman brick and stone still visible. Since much of the modern city is built over Roman remains, it is still not uncommon to unearth Roman artifacts several miles away. A complete tile kiln was found in Park Street some six miles (6 miles) from Verulamium in the 1970s, and there is a Roman mausoleum near Rothamsted Park five miles (5 miles) away.

Comments: The Roman ruins of Verulamium are part of a bigger attraction, which is St. Albans. This area’s history pre-dates the Roman occupation and continues through Saxon and Norman times. St. Albans is a beautiful day trip just outside of London for the tourist who wants to see more than just the most common historical sites within the London city limits.