Posted on August 30, 2012 by teacherideclare

Durham Castle dates back to Norman times. Construction began in 1072 shortly after William the Conqueror defeated the British at the Battle of Hastings. Since 1840 it has served as the home to Durham College. More than 100 students live there today. 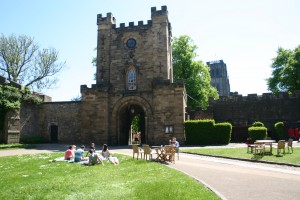 Students were out on the lawn in the courtyard by the front entrance of the castle enjoying a rare day of English sunshine.

Durham Castle is in Durham which is south of Newcastle and north of York. It is physically located on the same property as Durham Cathedral, one of the most popular and oldest cathedrals in England. 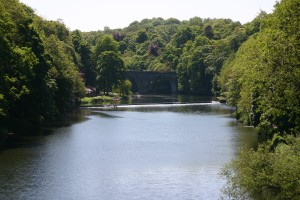 The River flows just below the Durham Castle. 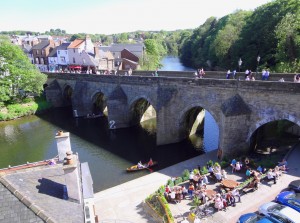 The River Wear runs through the heart of Durham where shops and cafes line the banks today. Castle Durham was built on a hill overlooking the river creating a beautiful backdrop for the 11th century castle.
The only way to tour the castle is to go with a group. The tour guide is always a student and there is a limit on the number of tours they offer a weekend. We met at the front gate of the castle and entered into a round courtyard at the center of the castle. Since it was a nice, warm and sunny day there were students sunning outside on the grass. Some were studying, others picnicking or talking with friends. Used to the tours, they largely ignored us.

The castle is relatively small and circular. We entered into the main doorway and were directed to the kitchens. Food is still prepared in the same area today for the students as it was almost 1,000 years ago for its original owners. The students eat in what used to be the Great Hall of the castle complete with splendid bay windows, a large fireplace and a balcony overlooking the guests. It looks like a smaller version of the dining hall in the movie Harry Potter.

Watch this video. It is a 360 view of the inside of the castle. You can hear the student tour guide speaking to the group.

The tour guide was well informed, polite and knowledgeable of the castle’s history. We climbed a wooden staircase that was hundreds of years old and walked down the gallery area where paintings and sculptures would have been on display. The tour eventually led us to a dungeon which was the oldest area of the castle. The old Norman walls were still visible. It was here that under siege the inhabitants once escaped to safety through a hidden door. 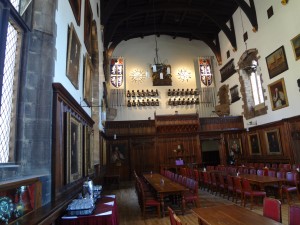 At one time this was the largest Great Hall in England. Students who live in the castle still eat in the Great Hall.

The Great Hall and the 2 chapels are the most impressive rooms of the castle. There are two chapels: 1) Norman Chapel built in 1078 and 2) Tunstall’s Chapel built in 1540. The Norman Chapel was used as a bomb shelter during WWII. Both chapels have extensive intricate woodwork and remain in use today.
It was disappointing but understandable we weren’t able to go into the living quarters and see the different rooms in all of the buildings. However, it is home to 100 college students and the college does it’s best to respect the privacy of the students.

The Background and History

Once King Harold and the English troops were defeated at the Battle of Hastings, William the Conqueror wasted no time in showing the English who was in power. He destroyed small towns and villages on his way to London in hopes of intimidating Londoners into negotiating for peace which they did. Upon entering London triumphantly, he set about with great building projects including the Tower of London (built on an old Roman site), Westminster Abbey and castles throughout England. It was shortly after the Battle of Hastings that Durham Castle was commissioned to be built. Building the castle was strategic to defend the troublesome border with Scotland as well as control local English rebellions. 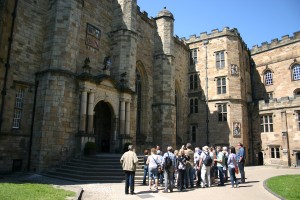 Students at the college lead the castle tours. 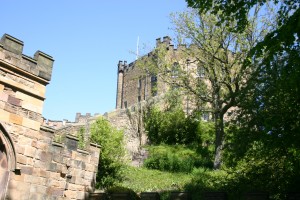 This picture is taken from below the castle along the Wear River.

The castle is an example of a style of popular castle architecture during the Norman period known as “motte and bailey”. Basically the castle stood on a mound (motte) surrounded by an inner and outer bailey (fenced or walled area). The remaining buildings (trades, stables, etc.) were walled outside the castle with less protection.

Durham Castle became the home and responsibility of the Bishop of Durham who was appointed by the King. It remained the Bishop’s Palace until 1837 when the Bishops moved to Auckland Castle, an estate nearby, and the castle was given to the newly formed University of Durham. It remains today as part of the university.

The streets of Durham.

NOTE: The city of Durham wraps itself around the college and Cathedral near the banks of the Wear River. It is a delightful town and has a lot of activity and energy the way most college towns do. I wandered into the town from the castle and enjoyed the sites. Here are several video links that I hope you enjoy. It was a beautiful Sunday afternoon and the people of Durham were out enjoying the sunshine.

Watch this video. It was taken in the town square of Durham after visiting the castle. Enjoy the music.

Comments: The castle is old and played an important role in early English medieval history. It would be an interesting location to attend school.

This entry was posted in Castles, Cathedrals, Universitites. Bookmark the permalink.