Posted on August 12, 2012 by teacherideclare

Bolsover Castle is a stunning castle perched on the top of a hill overlooking the beautiful English countryside. It is unusual in that it was built as an estate house to look like a castle. It received the nickname “Little Castle” when built. I always imagine the first reaction of medieval travelers as they rode their horses and carriages up the road for the first time as I approach the castle by car.

It is east of Chesterfield (home of the Church of the Crooked Spire) about 20 miles, southeast of Manchester.

Perched on top of a hill up from the motorway (highway) I stopped to take in the sight and take a picture of the castle above me. King Charles I was entertained at the castle in 1634 by the Cavendish family. Queen Mary visited the estate in 1912. 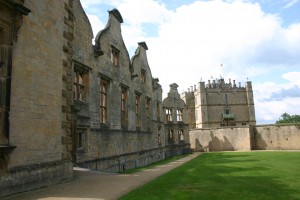 This is a view outside of the stables from the courtyard. On the left is the inside view of the Terrace Range with the Little Castle in the background.

Bolsover Castle is a stunning castle perched on the top of a hill overlooking the beautiful English countryside. It is unusual in that it was built as an estate house to look like a castle. It received the nickname “Little Castle” when built. I always imagine the first reaction of medieval travelers as they rode their horses and carriages up the road for the first time as I approach the castle by car.

It is east of Chesterfield (home of the Church of the Crooked Spire) about 20 miles, southeast of Manchester.

Perched on top of a hill up from the motorway (highway) I stopped to take in the sight and take a picture of the castle above me. King Charles I was entertained at the castle in 1634 by the Cavendish family. Queen Mary visited the estate in 1912. 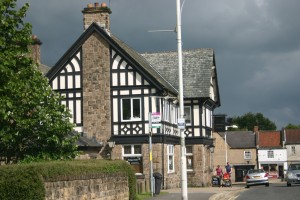 This house is the type of house that surrounded the castle at one time. 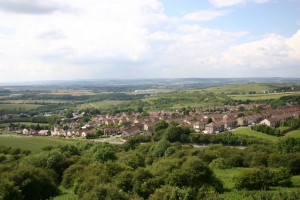 This is the view from the castle today.

I drove through the narrow, winding, stone street known as Castle Street. It is the same in all medieval castle towns. Visitors approach from the unprotected rear of the castle, away from the view of the tower. That is one indication this tower was never meant to be a fortress but rather a home, a place to entertain.

Bolsover Castle – Inside the Outer Courtyard

The castle is in amazingly pristine condition. Restoration work was complete in 1999 that uncovered much of the original woodwork and the color of the rooms inside the castle. The Cavendish’s were consumed with horses evidenced by the enormous stone structure for shoeing the horses, a large stable and a “riding house”. The castle stables are one of the best preserved in England. No other castle I have visited had such extensive stables. 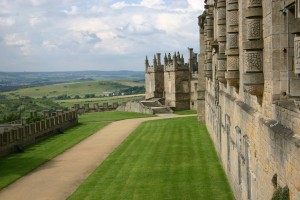 This is the view of the castle and hill from the front of Terrance Range. 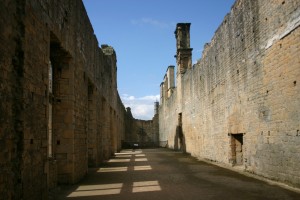 This is a view of the Terrace Range from inside

The “Terrace Range” is a series of guest rooms, bedrooms, dining rooms, drawing rooms, galleries and other entertainment areas. The elongated building overlooks the countryside below and must have been spectacular view 400 years ago when it was built. The former living area today is a remnant but it has been restored enough to see how spectacular it must have been when Charles I visited. 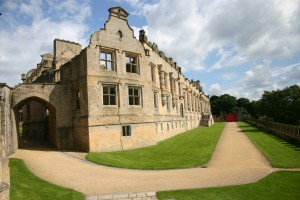 This is the front of the Terrace Range from the castle. 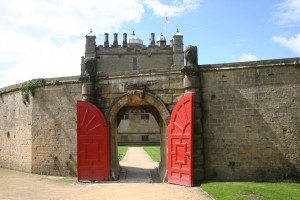 This is the back path that leads through the wall to the Castle.

After the stables and Terrance Range is the approach to the “small castle” on the crop of the hill. Between the Terrance Range and the castle is an outer circular wall protecting the castle. As you walk through the gate you see a beautiful courtyard with gardens, statues and water fountains. There were few people the day I visited and it was most peaceful. As the picture shows above the water fountain was elaborate.

Visitors are required to enter the castle through a main entrance created by the Cavendish’s to provide a spectacular view of the valley below. It is highly decorated and intended to create an impressive entrance. It requires a person to stop and admire the surrounding landscape. 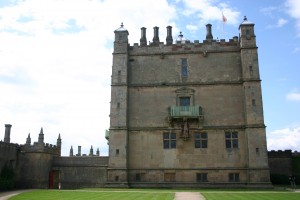 Side view of the castle from the gate. 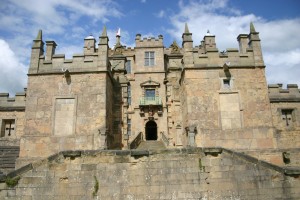 This is the front view of the Small Castle from the front gate.

The castle itself is four stories high with an abundance of small rooms. Unlike a larger, more elaborate castle, Bolsover has the same number of rooms just much smaller. Each room is highly decorated with ornate handcrafted woodwork and some of the original colorful paint has been restored. As in all castles, the higher up a person stayed or worked the more important the person. The “upper class” is a term used today derived from this practice. 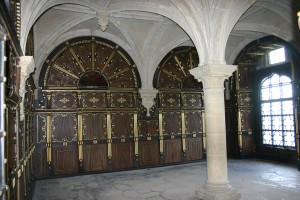 Beautiful artwork has been restored and is magnificent. 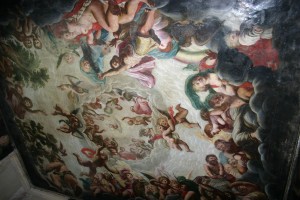 The ceilings were restored and as you can see they were amazing. 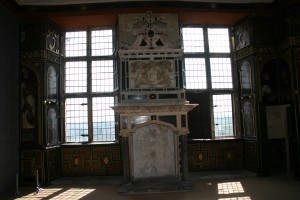 This is a fireplace in one of the rooms.

The rooms were marked with wall plaques with explanations of their usage and some of the rooms had some interesting history. Cavendish’s bedroom had a private guardrobe (toilet) and a way to sneak “guests” into his room from the outside. There is a maze of guest areas, additional bedrooms, fireplaces, gathering places throughout the castle which must have left a unique impression on the guests of the Cavendish’s.

Before the Norman conquest Bolsover was in the Saxon kingdom of Mercia. William the Conqueror granted the area to William Peverel after the Battle of Hastings. There was a rudimentary castle built on the hill during this time but the Peverels lost the castle when they were on the wrong side against King Henry II in 1152. A medieval castle was later built on the site but didn’t survive the siege as a result of the revolt against King John in 1223 when one of the towers was breached. It fell into ruin and much of its materials sold off. To an Elizabethan traveler it appeared as a “great building to an old castle”.

Charles Cavendish purchased the castle in 1608. Cavendish was a soldier with a passion for arts, music and architecture. His tombstone in the graveyard of the church nearby says he was a man whom, “wisdom, honor, content, made happy”. It is believed that Cavendish hired the brilliant designer Robert Smysthson to work with him on the design of the building. It was built over the foundations of the previous medieval castle. 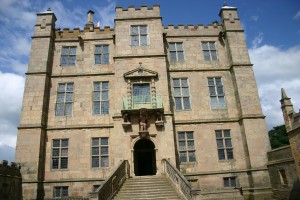 This is a view of the Little Castle entrance from the front gate.

Intricate records were kept and have survived showing the details of how the castle was built. In 1612-14 50 men were on site with women, boys and even girls to help them. Some of the “boys” were apprentices but other children were employed carrying stone and sand. The castle was an interesting combination of both old and new architectural ideas.

Four years after the work on Bolsover began Charles Cavendish died. His son William used it as his country home until his death in 1676. William lived in nearby Welbeck Abbey but visited the castle frequently. He had a household of 45 people which included his wife and 5 children. The entire group usually ate together in the early afternoon and was usually finished by mid-afternoon. A menu survives showing different tables for “my lord”, the steward, gentlewomen, children, nurses, grooms and “those that wait upon the masters’”. The lower tables had only mutton and porridge while William had “larks, pies and other small boiled meat”. 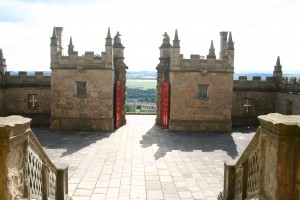 This is the view of the front gate from the entrance to the Small Castle.

The castle played a key role in the extraordinary life of William Cavendish. He was known to be a voracious philanderer. His second wife Peg was a writer who authored his biography and chronicled much of his life. In her own words with regard to his wandering ways, “Whether this be so great a crime to condemn him I will leave to the judgment of young gallants and beautiful ladies.” From all accounts he was a loving husband who wrote many poems to both of his wives and his mistresses.

His first wife, heiress Elizabeth Bassett, died when he was fighting the civil war in 1643. In 1645 he met Margaret, whom he nicknamed “Peg”, in Paris. William wore fashionable clothes “unless they were inconvenient for horse-riding and heroic actions”. According to Peg he was always neat and cleanly which made him “long in dressing”. Even in war his vanity had no limits. Those serving him complained that “he lay in bed until eleven o’clock and combed till twelve”.

Because of her biography we know he ate little, normally one meal a day. Although time was spent in managing his estate it was not his first love. He spent time instead in music, poetry, architecture and horses.

Peg was known to the world as “Mad Madge of Newcastle” and she may have been more eccentric than William. An author of philosophical books, rare for a woman at that time, plus her bizarre behavior contributed to her reputation. One contemporary wrote that “there are many more soberer people in Bedlam.” Although she spent a great deal of time writing in her closet she also loved to make outlandish public appearances. Her prolific writings were highly unusual for a woman in the 1600s. She was an ardent supporter for women’s rights in a time when there were none. She wrote of the inferior education and role allotted to women. She suffered the usual fate of women who did something in a “man’s” field which didn’t seem to bother William. Her writings provoked an uneasy fear that the “lesser” sex was overstepping her boundary and she was accused of “dangerous peculiarity”. 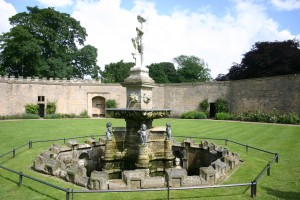 The fountain is the centerpiece for the inner courtyard garden.

For all of their unconventional ways there was one event that would define William’s legacy. He was a key royalist leader in the English Civil War as Commander of the troops north of Trent. He is most famous for losing the north for the King in a crushing defeat at the Battle of Marston Moor in 1644. He fled to the Continent to escape the Parliamentarian army. Bolsover Castle was captured by the Parliamentarians in 1645. With cannons trained on its walls its occupants surrendered without a fight.

Like many of the Royalist leaders, William was unable to return unless he apologized for his role in the Civil War which he refused to do. His brother stepped in, paid a hefty fine for William and gave the estate to William’s children to use the income. After the death of Oliver Cromwell, leader of the Parliamentarians and Lord Protector of England after the Civil War, and the restoration of the monarchy, King Charles II invited William to come home but his reputation and position with the royal family was tarnished by his military failure. William died on Christmas Day 1676 at age 83 and was buried in Westminster Abbey under a tomb marked “The Loyall Duke”.

Comments: The castle is worth visiting and its stables are unmatched in any castle I have visited to date. It is unusual as it is both an estate house and a castle. There is a great deal of unusual artwork and woodwork in the main house that has been restored and is visible today. 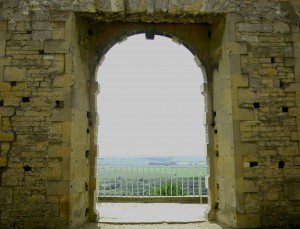 Beautiful view through an arch on the Terrace Range.

This entry was posted in Castles and tagged Casle, Casles, Castle, Castles, castles in the UK British castle, medieval castle, wall of a castle. Bookmark the permalink.